SEM@S is being carried out by Kranj City Library in collaboration with Gimnazija Kranj. It discusses the industrialization of Kranj – although excluded from the school curriculum, this is an important subject because Kranj was among the most industrially developed towns in this part of Europe in the period between the First and Second World Wars. 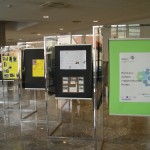 The majority of the capital invested into industrial development came from other European countries,so this subject also tells a story of European collaboration.

The industrialization of Kranj brought about changes in people’s way of life. The project will place special emphasis on personal stories which will later find their place within the broader historical framework.

Work will be divided between two classrooms, each consisting of several groups. The first group will research the historical background to the industrialization of Kranj and make posters for the library exhibition. 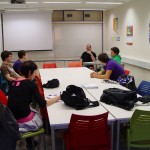 Reviewing material from The Historical Archives

The local museum (Gorenjski muzej) will give a presentation on the industrialization of Kranj with the material from that period. A representative of Ljubljana Historical Archives will pay a visit to the students and show images, documentation, plans and contracts from that period.

Based upon this research, the second group of students will conduct interviews with their parents and grand-parents. Then the students will combine both views on history and make a critical assessment. Finally, based upon the information, five students will make a short documentary film. They will work with professional film-makers and equipment.

At the end of the project, the library will host a public film screening and discussion.